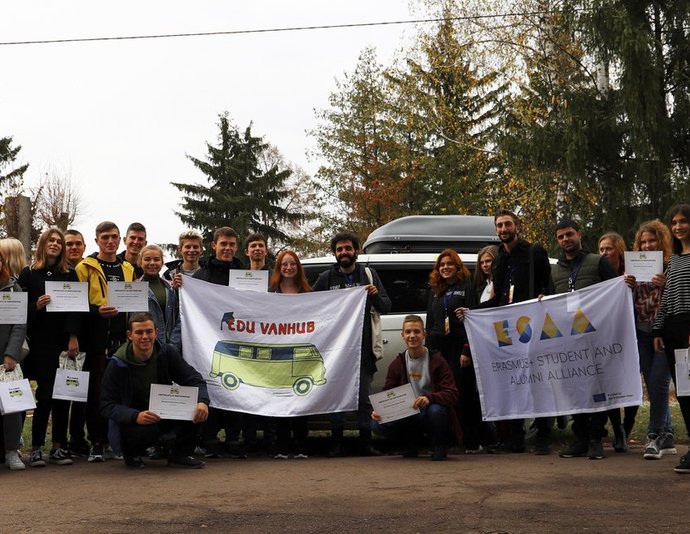 The project was proposed by garagErasmus4Yerevan youth organisation.

After the successful implementation of the pilot phase of “Edu VanHub” in Armenia, the educational project launched its second - international phase, this time in the Ukraine.

The central goal of the project is to help young people from socially disadvantaged backgrounds to build their media literacy skills through immersion into innovative and inclusive environments.
Another important goal of the project was to organise the Erasmus+ outdoor promotion: during the long ride from Armenia to the Ukraine (Armenia-Georgia-Russia-the Ukraine), the garagErasmus4Yerevan team promoted Erasmus+ in eight cities  in the above-mentioned countries which resulted in a great number of people being informed about ESAAeu and Erasmus+ (Cluster 2: Spreading Erasmus+ and Widening Participation, Component2: Increase knowledge of the Erasmus+).

The project organisers conducted ten media workshops in five Ukrainian communities in order to empower disadvantaged young people living in rural areas through educational space in a van type car Media Hub (Cluster 3: Increasing Social Inclusion, Empowerment, and Participation, Component 1: Give voice to marginalized populations). Besides the media workshops, the project organisers could introduce the participants to the Erasmus+ programme and its opportunities by providing them specific info sessions about Erasmus+ (Cluster 2: Spreading Erasmus+ and Widening Participation, Component 3: Facilitate access to Erasmus+).

In each rural community our team had two media workshops - one of them being theoretical and the other one practical. During the first and second workshops we had a lunch break and friendly chats with the participants, then followed by a session about Erasmus+, a film or cartoon screening, and finally - evaluation, the certificate giving ceremony, participants interview and group photo.

It is hard to imagine a success of the Edu VanHub international phase without effective partnerships: The main partner of the Edu VanHub international phase was Erasmus Mundus Association (EMA) Ukraine. Other partner organisations were: National Erasmus+ Office in Ukraine, National Erasmus+ Office in Armenia, European Leadership and Debate Academy (ELDA), NFED - Сenter of non-formal education NGO, Obyrok eco-settlement etc.. The Urban Space 500 café in Kyiv city had an important role for the promotion of the Edu VanHub project in the Ukraine; the café hosted the presentation-event of the project.

The expected key results were fully achieved: After the workshops some of the participants initiated media start-ups and initiatives. The feedback of the participants, their parents, schools and local authorities about the media workshops was very positive. Another successful key result was a documentary movie of the project which will serve for raising awareness of the project, its vision and mission. More over, it will help to strengthen the image and improve the quality of the educational projects within feedbacks. And the biggest outcome of the project is the communication kept with the participants after the workshops: Particularly, the participants who still have an interest of learning more, finding new educational opportunities or to initiate media start-ups can get free mentorship, advice and information from the organising team anytime via the online platform www.eduvanhub.com or contacting to the team directly through social media.

A very fundamental element of success of Edu VanHub international phase was/is the visibility of the project and specifically the branding strategy of the project.

After the educational trip to the Ukraine, the Edu VanHub project (both pilot and international phases) was presented in Brussels during the NEO-ICP meeting 2019.